In October 2011 the Greenhouse Gas Protocol (GHG) product standard was launched and the PAS 2050 was revised. And the development of ISO 14067 is ongoing.  This raises the question: Which standard to choose?

In addition to these three standards, also numerous other initiatives were initiated by either public or private organizations at the regional and local level. So how can a company decide which carbon footprint standard best supports its sustainability strategy?

A Product Carbon Footprint (PCF) is a means for measuring, managing and communicating greenhouse gas (GHG) emissions related to goods and services. A carbon footprint is based on a life cycle assessment (LCA) but focuses on a single issue which is global warming. An increasing number of companies quantify the carbon footprint of their products. Companies make these efforts for multiple reasons: enhancing market reputation, engaging with suppliers, clients and other stakeholders, and setting a first step towards a more comprehensive environmental footprint.

In response to the need for transparency in the greenhouse gas (GHG) emissions of products, several standards have been developed or are still under development. There are three main Product Carbon Footprint standards that are or will be applied worldwide: PAS 2050, GHG Protocol and ISO 14067.

All three standards build on existing life cycle assessment methods established through ISO 14040 and ISO 14044. However, small differences exist among the standards. BSI, WRI/WBCSD and ISO cooperated to increase alignment of the standards. The Draft ISO 14067 is being considered as the more general standard, although some requirements are quite specific, e.g. requirements on the use of green electricity. PAS 2050 and GHG Protocol provide more detailed requirements and guidance with less space for interpretation. Recently the PAS2050 was updated and is now more in line with the GHG protocol. Also the Sustainability Consortium and the Consumer Goods Forum have adopted the GHG protocol as their basis for data collection.

Product Carbon Footprint standards give guidance to companies in conducting PCF studies and at the same time support the credibility of Carbon Footprint metrics in the market place, which will be beneficial for application purposes. However, the existence of three standards may be confusing to companies when they start calculating their carbon footprints.

In addition, numerous other initiatives have been initiated by either public or private organisations at the regional and local level. Some of these initiatives focus solely on GHG emissions, while others include other environmental impacts as well. The Japanese government established the Carbon Footprint Program in 2008 and launched the Labelling Pilot Project in April 2009. France introduced the BP X30-323 and holds a 1-year experimentation phase as from July 2011. The European Commission is currently developing and testing an environmental footprinting methodology in a pilot test which runs from July 2011 to February 2012. In the overview below you see a chronological overview of recent product carbon footprint initiatives and initiatives that incorporate GHG emissions in a broader context.

Which standard to choose?

The increased attention for carbon footprints of products and the efforts for streamlining the carbon footprint analyses are very welcome on the road to sustainability. However, the large number of standards and initiatives can be overwhelming and confusing to companies. This raises the question: Which standard to choose? How can a company decide which carbon footprint standard best supports its sustainability strategy? And should a company focus on one standard only or should it be flexible? 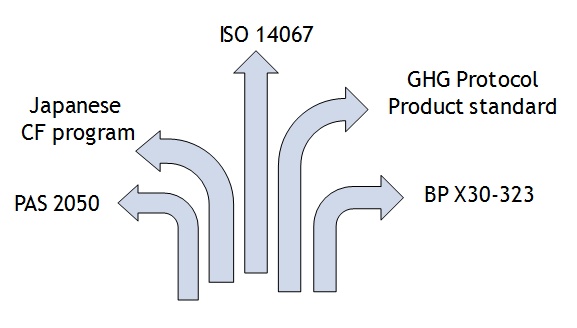 Unfortunately there’s not one simple answer to these questions. But there are a few steps that can help to answer them.

Based on desk research, internal (and external) knowledge and input from internal stakeholders a landscape can be drawn of the relevant developments in your sector and company. This will answer questions like:

The landscape map will provide you with a shared insight in the Carbon Footprint context for your company. This will help in defining the most relevant developments and opportunities and will enable you to set priorities.

Identify the key stakeholders as well as the best practices within your company. Depending on your priorities you can also organize meetings with representatives from relevant organisations, like industry associations or the WBCSD. Consulting stakeholders will help you to clarify the different perspectives on Carbon Footprinting in and outside your company. Once the stakeholders and their viewpoints are established, these can be aligned. Aligning stakeholders aims to deliver an internal sense of urgency. Establishing a common ground in quantifying and reporting Carbon Footprint metrics, and to make it a business driver for reducing GHG emission and creating value. This can then become a shared goal for various departments and managers.

Create a roadmap that contains your company’s ambitions and actions. Assess the current situation and your long term goals. Define an inspiring company vision to align your employees. Break your goals down into smaller, measurable actions. Approach the project as an iterative process. Learning what works for your company and what doesn’t, is an important experience that helps your organisation reach its goals. This also fits with the fact that there is no uniform standard (yet) and new standards are being released (see below ).

The steps above can help you choose the standard(s) that gives the best guidance to your company in conducting CF studies and provide credibility to your companies’ Carbon Footprint metrics. Making it business relevant, driving down carbon, and creating new business value drivers.