2B references the initials of the founders’ names, but the meaning in Englisg, “to be,” immediately struck a chord. Because wanting, doing, and creating all arise from being. 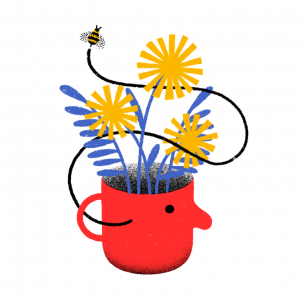 At first it was a bee. 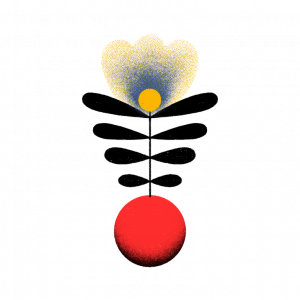 Then came the dandelion.

The dandelion, with its sequence of surprising transformations, perfectly represents a life cycle, the fulcrum of our work. The dandelion became part of 2B with our holiday card many years ago: “A new year, a new cycle, we wish you all the best in life.”

Dandelions are found all around the world, from plains to mountains, in open fields to cracks in gray cement. In the public eye, though not vain, it’s a humble plant with a noble heart, resilient and surprising.

It appears in spring and its first leaves are tender, so tender they can be eaten. It then turns into a bright yellow flower. Then comes the seedhead, incredible architecture built by nature, the lightweight sphere that has inspired so many artists and writers. Its ingenious design allows it to float on a breeze for miles. Researchers at the University of Edinburgh studied its flight paths and discovered that its parachute-like shape made of many tiny hairs lets air blow through it, creating a type of vortex that’s one of a kind. This tiny vortex creates a small low-pressure bubble, which draws the seed upwards. Man has still not made such a device, but how many people have been inspired by this plant, and how many will be inspired in the future?

It stands out for its varied properties and characteristics, which have given Taraxacum its common name, dandelion (which comes from the French, dent de lion - lion’s tooth) for the shape of its leaves, but also yellow gowan and Irish daisy, wild endive for its culinary uses, and blowball for the spherical seedhead of the mature flower.

It can be eaten in its entirety: the flower, the leaves and the roots.

And who, as a child, didn’t energetically blow on one, perhaps even making a wish?